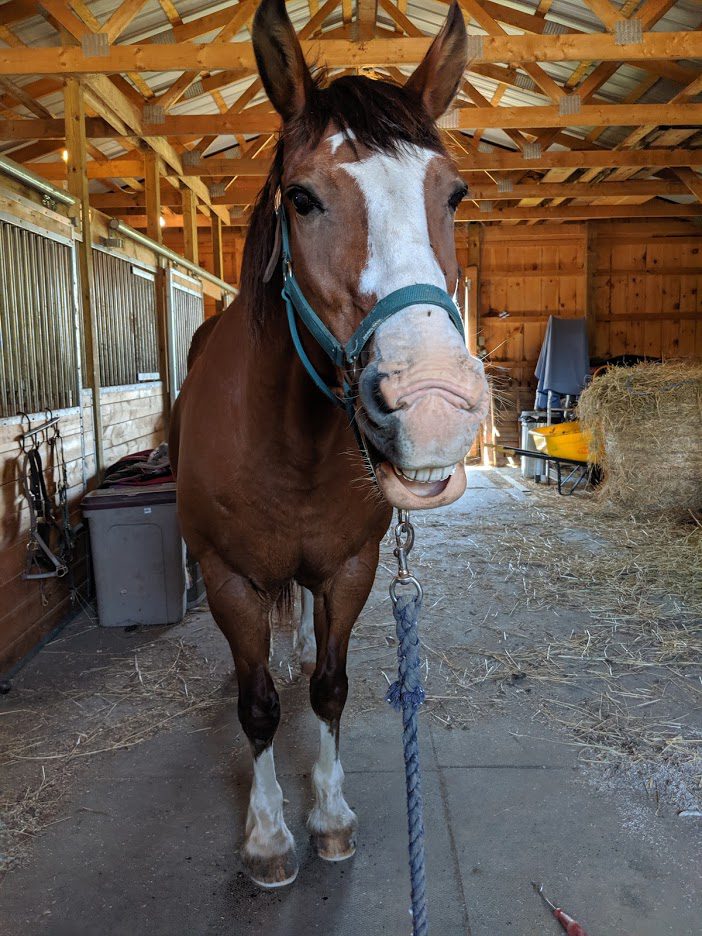 Bentley has a history of soft feet, thin walls and low heels. He wore front shoes most of his life (approximately 23 years!). His person tried Farrier’s Formula, BMZ, Biotin etc., but nothing seemed to help much.

During the summer of 2019 Bentley ripped off one of his shoes and a large chunk of wall with it. There was nowhere to nail the shoe back on and Bentley was not sound barefoot, so Tricia (Bentley’s person) called us out to fit him for boots.

We fit Bentley with one Scoot Boot because he still had a metal shoe on the other foot and his person didn’t think he could ever transition to barefoot. The boot was only meant to be temporary until the shoe could be nailed back on. We visited Tricia’s farm again about a month later when she asked us to look at Aztec to fit him for boots. After giving Tricia more information on how we thought we could help her two boys, she allowed us to take over their hoof care program.

We pulled Bentley’s other shoe and gave him a trim. After taking his toes back quite a bit, it was clear the Scoot Boots would no longer fit so we purchased them back from Tricia (ask us about our boot rental program!). Bentley had a stretched toe (capsular rotation), a contracted, low heel, deep thrush, very thin soles (less than 5mm). His sole was convex rather than concave so we built Bentley some concavity with a Vettec Adhere glue shoe, packed his central sulcus with Artimud and poured in a Vettec Soleguard pad to protect his coffin bone.

At our next visit he had enough heel that we were able to cast his feet for protection. On the third visit, when we were sure that his hoof size had stabilized he was fit with Cavallo Hoof Boots and Easycare Pads.

Bentley’s person reports that he stopped needing his boots in December 2019 and has been very sound. She is extremely impressed and ecstatic as she never thought she would see the day he could go barefoot.

Thank you for your message!

One of our amazing hoof care professionals will be in contact with you shortly!

In the meantime,  join us in our online community: